“I’m not their main course, I’m their dessert”

I was wondering why the ants kept biting me.

I had just moved into my new apartment in Puerto Vallarta, Mexico. I’ve decided to spend the next few months here, where the cost of living is lower, so I can focus on selling my book and making music without having to work in software to pay the rent. I found a beautiful 1-bedroom apartment in old town Puerto Vallarta for $550 a month. The view from my apartment in Puerto Vallarta

Everything was perfect, the furniture, the views, the pool on the roof, even the water pressure, which is literally the best in Mexico. Everything except the ants.

These were definitely not the worst critters I’ve ever dealt with. I’ve lived in Texas, where we had fire ants that wait until at least 50 of them are halfway up your leg before they start biting. You better have a swimming pool close by when that happens because it’s the fastest way to get them off. And I’ve lived through more than one bedbug infestation, the most recent being a San Francisco bed-and-breakfast where I could literally feel them crawling on me, and I actually caught one in the act of biting me. And the less said about Houston cockroaches, the better. These ants, in comparison, were tiny, and their numbers were small, but their bites sure did sting.

What was it about me that led them to climb all the way up into my apartment to bite me? Did I smell especially delicious? Granted, I had been eating delicious Mexican food, both in Mexico and in San Francisco. And these were Mexican ants.

I had to get to the bottom of it. I started looking around to see where the ants were coming from. There was a trail leading from the wall to a tiny speck of food. And then I realized: “They didn’t come into my apartment to eat ME, they came for the food crumbs. I’m not their main course. I’m their dessert”. Turns out the kitchen was not as clean as it appeared to be at first glance. I guess the maid who cleaned up after the last occupant wasn’t as thorough as she could have been. 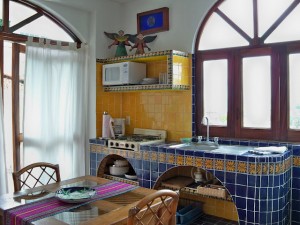 The kitchen where the ants keep getting in

So, I figured if I kept the kitchen spotlessly clean, the ants would have no incentive to come back. But it was a lot harder than it sounded. One morning I found the ants swarming the counter, and I didn’t understand why since I had cleaned very thoroughly the night before and I hadn’t had breakfast yet. Then I realized: it was the lemon I had squeezed into my water. A drop or two had landed on the counter, and these being Mexican ants, of course they LOVE limón. From then on, I sliced and squeezed my lemons directly over the sink to ensure easy and thorough cleanup.

But damn if these ants aren’t persistent. They’re constantly sending out scouts to look for any scrap of food I’ve inadvertently provided them. If I leave anything out at all, they’re swarming it within the hour. They must see me as a harsh and angry God, one minute leaving out delicious food and the next minute slaughtering them with Pinol.

I’m beginning to suspect that their colony is actually in my apartment, due to how quickly they appear and the holes in the wall that they usually come from. I’m going to talk to my landlord and see if we can seal the holes up with caulk or something to get to the root of this problem.

Until then, I probably have the cleanest kitchen of any man in the world.

P.S. If you want a full tour of my new place, here’s a video my landlord made.